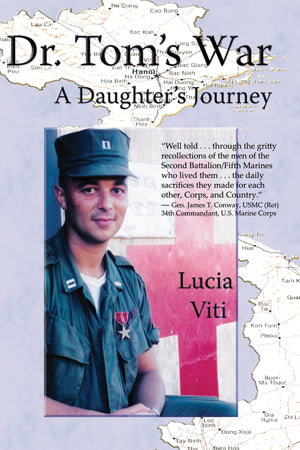 One fateful day, Lucia Viti stumbled upon an ancient Harry & David fruit box while cleaning the attic. The box was filled with Vietnam memorabilia—the remnants of her father’s tour of duty in 1967 as a Battalion Surgeon in An Hoa. Lucia became obsessed with a need to reconnect with the memories of her father and spent four years traveling across America, gathering stories from the Marines of the Second Battalion Fifth Marine Regiment, First Marine Division who served alongside her father.

This quest to learn about a Dr. Tom she never knew turned into a unique journey of discovery through the eyes of a very special brotherhood of young men. A journey that weaves the Marine esprit de corps with the horrors and humor of war with a first-hand, no-holds-barred perspective on combat life in Vietnam in 1967.

PRAISE: “Ms. Viti’s effort, detailed and emotional, is a great personal tribute to her beloved father. Dr. Tom’s War – A Daughter’s Journey fills a gap in the literature of the Viet Nam War.” — Otto Lehrack, Lt. Col. USMC, (Ret.) Author: No Shining Armor: The Marines at War in Vietnam