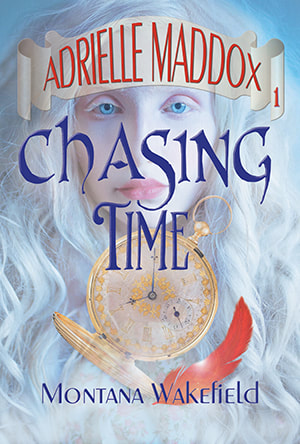 What seventeen-year-old Adrielle Maddox wants most in life is to fit in. But she’s a strikingly beautiful Albino, a foster child whose mother died in a suspicious fire. Dumped by her boyfriend on her birthday eve, Adrielle wishes her life were different. Then Coco, her sister, gives her a broken watch once belonging to their mother.

Coco drags Adrielle to a party where they join their besties. Adrielle has an encounter with an ancient immortal, Domenikos, who has captured her boyfriend. He demands her watch in exchange for his life.

Before she can react, Adrielle’s broken watch starts ticking seconds before midnight. Earsplitting gongs shake the room. Domenikos slashes her boyfriend’s throat and vanishes. Then Monika, an old seer with diamond scepter, appears.

She hands Adrielle a mysterious journal dated 241 BCE, and when Adrielle starts to read, its empowering words spur a rush of memories. Monika divulges: Adrielle is from another epoch. Her birthmark is the mark of the traveller. Her watch is a unique time-travelling device.

Hope surges through Adrielle. Could this be her chance for a do-over? Can she find out who she really is and change her life? So she doesn’t have to be the outsider? Monika sees Adrielle’s hunger for change and warns her of the time travel paradox. Even with the warning, Adrielle is determined to find her true self and travels back in time as a spunky warrior locked in a high-stake cat-and-mouse game with her nemesis, Domenikos.