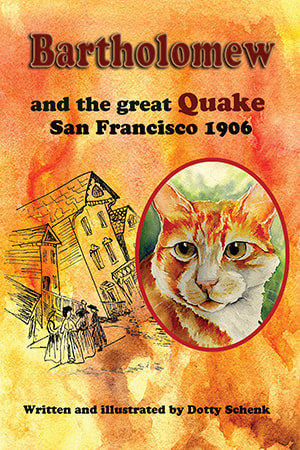 Batholomew and the Great Quake - mobi

It was about ten minutes after five a.m. when Bartholomew began to eat his breakfast. Suddenly, his dish began to shake, and then it slid across the room. Bartholomew was frightened and the fur on his back rose as his dish slid away from him.

As Bartholomew tried to get to his dish, he heard a loud roaring noise. In the kitchen, Bartholomew slid around the room. He could not get his feet to work. As he slid past the kitchen table, Mrs. Higgins reached out and grabbed the frightened cat. She pulled him toward her, and they both lay under the table. It seemed liked eternity as the shaking became much stronger. The whole house was moving up and down, and everyone was afraid it would collapse on them.

Follow Bartholomew, a large orange tabby cat from his feral birth in Cow Hollow to being adopted by a wealthy family.

He experiences the terrible earthquake in San Francisco on April 18, 1906. San Francisco is in ruins and Bartholomew travels into the demolished downtown area of the city. Experience the sights he sees as he wanders through the ruins.

After his journey, he returns home to find the father of the family busy meeting with city officials as they begin the plans for rebuilding this great and beautiful city by the San Francisco Bay.