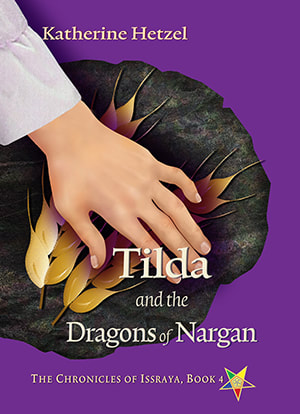 Tilda and the Dragons of Nargan - mobi

A wide-nostrilled black snout. Two bulbous eyes, shining white underneath a thick ridged brow. An opaque frill of leathery skin framing the face. Hints of purple light glinting on black scales. A long body, supported on four stumpy legs with widespread toes, and claws as long as a man’s fingers. A thickened tail, almost as long as the body, dragging on the ground.

Tilda saw it all in a split second, and whimpered, “Dragon!”

In Book 4 of the Chronicles of Issraya, Tilda, Mage of Merjan, is exiled to her own region and blocked from using her Power as punishment for her bone-shattering actions in Kradlock. While the other Mages deal with unusual crop destruction by the dragons of Nargan, Tilda is escorted by a Mage-appointed steward from Academy to Academy to gain a working knowledge of the people of Issraya.

Frustrated by her imposed schedule, Tilda sneaks away from her steward and secretly travels to Nargan to help with the rampaging dragons. But before she reaches her destination she is attacked by one of them instead. Rurik, a local Healer, saves her and tends to her wounds.

While recovering from her injuries in Rurik’s hut and without the use of her blocked Power, Tilda stumbles upon a connection with the marauding dragons and discovers the source responsible for their destructive tendencies.

Desperate to share her new knowledge, Tilda sets off with Rurik, hoping she’s in time to show the Mages there’s more to the crop destruction than just the dragons.