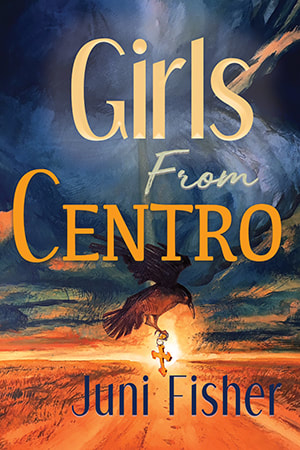 North of the Mexican border, freedom has a price.

Teresa sells souvenirs and helps care for her father’s fighting roosters in Centro—the heart of Nogales. When Teresa’s mother receives a letter from a friend assuring haven from her troubled marriage, she takes twelve-year-old Teresa and her sisters north, into the bone littered Sonoran Desert where the most dangerous predators drive cars, rob desperate travelers of hope, and sell the naïve to the highest bidders.

Their hopes of a new life swept away by a storm, Teresa and her sisters can’t return to Mexico, so following a hand drawn map, they forge on through the wasteland.

Three decades earlier, unmarried mother, Ana leaves her job at the convent in Centro to cook for a wealthy couple who’ve promised a privileged existence in Arizona. Ana is lured into an unimaginable barter to support herself and her children.

In intertwined stories a generation apart, Ana and Teresa are catapulted into a morbid tale of corruption, deceit, and indoctrination where money and power write rules no one dares to question.

Girls from Centro yanks back a tangled tapestry to expose a maze of conflicting heroic and evil characters, murky secrets, skeletons, and sacrifice in a spell binding, unstoppable dash to a rewarding, and unforgettable finale.