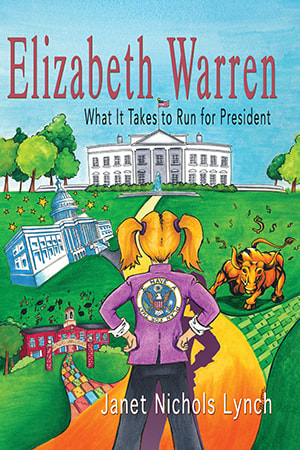 Before Elizabeth Warren was a Senator from Massachusetts and a presidential candidate with a plan for everything, she was a girl from Oklahoma who dreamed of becoming a teacher.

Young Betsy Herring was an energetic tomboy and such a whizz in school, her second grade teacher looked her in the eyes and said, "When you grow up, if you really want to, you can do something."

She was encouraged to give up her beloved teaching position at Harvard to run for Senator in Massachusetts so she could help not just her students but every American. Her “can do” spirit led her to run for President, and she became famous for the phrase “I have a plan for that . . .” Although she didn’t become president, she still lives by her second grade teacher's words that she can do something with her life and continues to persist in her efforts to make life better for ordinary Americans.

​Elizabeth Warren: What It Takes to Run for President shows every girl that all she needs is a plan and persistent to be someone in the world and maybe even change it for good.