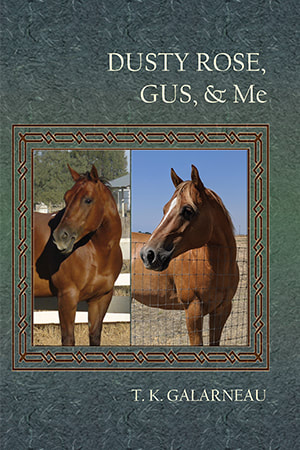 “Dad gummit Dusty! Would you get outta that?” I yelled. “You don’t need to be draggin’ my stuff all over God’s half acre.”

That was pretty much life with Dusty Rose. She was T.K Galarneau’s first attempt at raising a horse from birth, developing a quirky personality all her own that some would say was very similar to her owner’s.

“GusGus! Get that towel out of your mouth!” I yell as I stuff my stolen sweat rag back in my jean’s pocket. “You don’t know where it’s been!”

Dazz’s Lil Gossip’s, aka, Gus, is T.K.’s second attempt at raising a colt from birth. She’s been around Appaloosas all of her adult life, and with careful breeding of his mother, Dazz, Gus turned out to be exactly that, and was another blank slate she could train like she wanted as she had with Dusty Rose. if Gus turned out bad, no one to blame but herself.

An old cowboy once said, “If a colt gets spoiled, it’s the human at fault.”

Dusty Rose, Gus, & Me is a compilation of heartfelt poetry and prose of fond memories about life with the best equine friends a cowgirl could ever have!