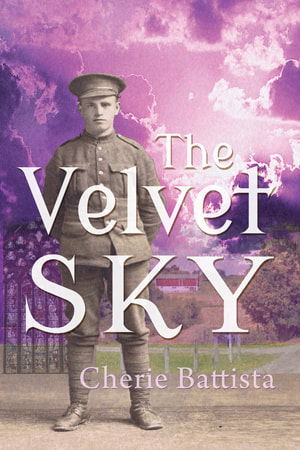 The Velvet Sky is a creative nonfiction biography by Cherie Battista who combines field research, family history, and fiction to piece together her Great Uncle Stephen Duckhouse’s life. He shares his story with his sister in spirit, Annie, who guides him throughout the story.

Stephen Duckhouse was born in 1897 in Birmingham, England and in 1910, Stephen and his brother Albert immigrated to Canada as Home Children–poor and orphaned children sent from the United Kingdom to Australia, Canada, New Zealand, and South Africa.

There he resided with Edgar McPhail, Ada Alde McPhail and John A. McPhail until 1916, when he joined the C.E.F. 129th Wentworth Battalion Regiment in Dundas, Wentworth Country Ontario. Although under age, he said that he wanted to do his duty. Later in Europe, Private Duckhouse became part of the 87th Battalion and took part in the action at Hill 70.

With respect to those voices who can no longer speak for themselves, it is important to acknowledge that Stephen and Albert and their close family are real people. Stephen’s story develops from darkness to light and evolves to show a bleak chapter of British and Canadian history can enlighten the path for others.