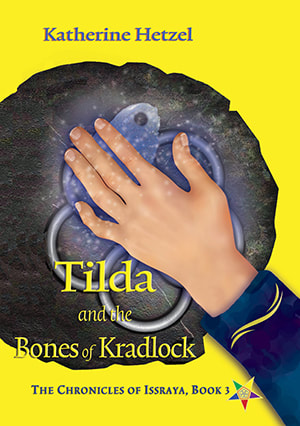 Tilda & the Bones of Kradlock - Chronicles of Issraya, Bk. 3 - mobi

In Book 3 of the Chronicles of Issraya, Tilda and the other mages of Ring Isle have a problem that could threaten their very existence. For the first time in their history, the powermages have in their possession silviron that’s been tainted with dark power, perilous to keep on Ring Isle or to exist anywhere in the world where someone could encounter it.

The mages decide to put the tainted silviron in a small metal box and drop it into the turbulent waters of the Merjan Straits, which lie at the point where the inner and outer seas meet. Since Tilda was the one to find the silviron that restored their power, she’s selected to dispose of the tainted silviron. Since Kamen, the aging Mage of Kradlock, has to cross the Merjan Straits to return home, Tilda accompanies him to fulfil her task and to help Kamen decide his successor.

Tilda soon discovers there’s more to Kradlock than the famous Hanging Rock, colourful clothing, and cliffs full of cavern homes and markets. Kradlock’s greatest pride are the honeycomb of tunnels full of the bones of ancestors, including the mortal remains of Kradlock’s powermages that not only test her growing abilities but her right to be called the Mage of Merjan.