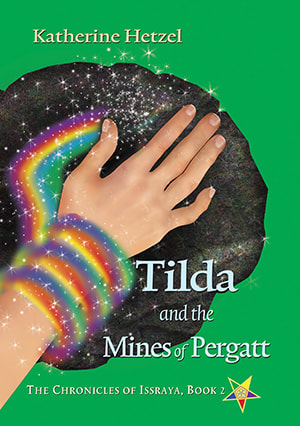 Tilda & the Mines of Pergatt - Chronicles of Issraya, Bk.2 - epub

Tilda’s initiation is barely over and she’s already taking her first powermaging lessons and learning the legends of Issraya. She secretly practices making illuminorbs in her room until she drains her energy to a level she knows Silviu will notice. She sneaks to the Ringroom to get a power boost. To her horror, she discovers the silviron in the Ringstone had been tainted in the battle with Luisa and the conduit to the Power is fading. Tilda’s waning Merjanian portion of the Power reveals there’s more silviron in the mines of Pergatt.

Despite Silviu’s orders to remain at Issraya, Tilda travels to Pergatt with Mage Duska in the hope of discovering the precious starmetal. Under the pretense of learning about the history of powermages and their regions, she joins a team of young gem miners in the hope they will lead her to the silviron.

In the mines, she stumbles upon evidence of the cursed stone from the most evil legend in the history of the mages. Now she hopes she has enough knowledge and skill to defeat its dark magic.