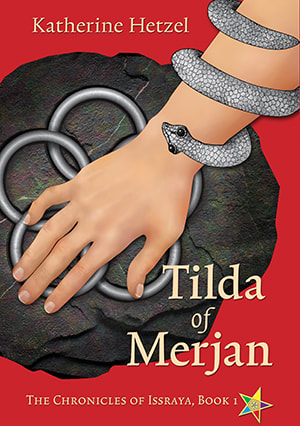 . . . a cloaked and hooded figure . . . its hand stretching towards her, a silviron ring gleaming dully in its palm . . . she reaches for it . . . The hand closes over the ring, flings it away. towards high snowy mountains in the far distance, where it winks out of sight.

Tilda has been angry with the Power and its mages ever since Pa died. Why didn’t the mages use the Power to save him?

Determined to find out, she sails to Ring Isle with her Uncle Vanya, steward to the mage Silviu of Ambak. But finding answers isn’t easy, especially when a rogue mage attempts to steal all the Power of the five rings for himself and leaves the remaining four mages trying to cope with the aftermath of the attack.

When Tilda tries to return a snake torc to Silviu, she is accidentally pulled through a Power-fueled portal and finds herself in Ambak. There, she realizes she’s the only one who can find the hidden ring of Ambak to restore the balance of Power to all the mages. As she tackles this challenging quest, Tilda discovers more about herself than she could ever imagine.