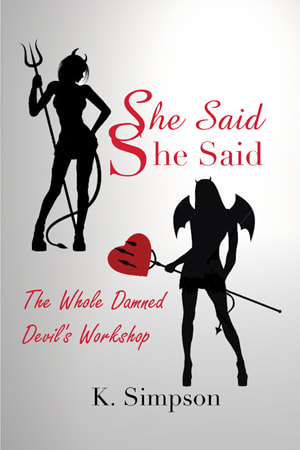 Devlin Kerry is the reluctant creative director in charge of sex at an advertising agency. Never mind that she’s been celibate for six years–for which she’s being haunted by her own personal demon, Monica.

Although her best friend Cassie Wolfe has dedicated herself to making Dev’s life a living hell, as luck would have it, she is the only person who can checkmate Monica’s devious behavior—until she gets her own demon, Vanessa.

For the first time, the complete adventures of Devlin and Cassie and their demons in two volumes. Including Several Devils, The Average of Deviance, Hell for the Holidays, and That VooDoo That You Do. Plus the final never before published book, This Means War. With a collection of short stories, Five Little Devils—She Said She Said, We’ll Always Have Paris, Half to Death, Spooked, and The Last Detail.