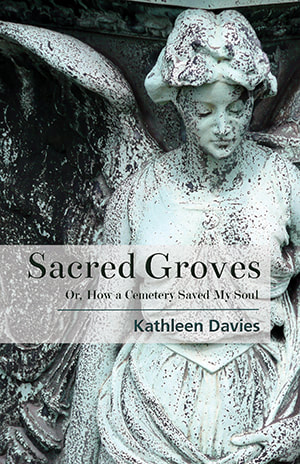 In the not-so-sacred Groves of Academe, where female colleagues can be less than supportive and male colleagues downright intimidating and even devious, Kathleen Davies felt intense pressure to prove herself as an English professor. But in the beautiful local cemetery, she found a truly sacred landscape that offered not only relief but inspiration. Once she was denied the professional success she had dreamed of, her interest in cemeteries became an obsession, and her photoshoots with her dog all over Ohio evolved into a spiritual quest that led to a surprising self-discovery.

By turns meditative and lyrical, at times even hilarious, Sacred Groves traces a spiritual journey from anxiety and failure to self-acceptance. It is a book for anyone who has ever failed to prove themselves, only to discover something far more important than worldly achievement could ever give. It is a story of resilience, healing, and salvation and a celebration of the power of landscape to lift our spirits higher.

PRAISE: “This memoir is an adventure through reality, bringing to the surface the sacred meaning of the human experience. Through meditation in a safe, solemn space, she was able to connect the insensible and unleash her inner creative. Davies proves that if one’s heart isn’t in their work, there isn’t a point in pursuing it, especially if there’s a lack of self. With that, she also is a living example that the pressures in society did not hinder her spirit.” — Review, Glassworks