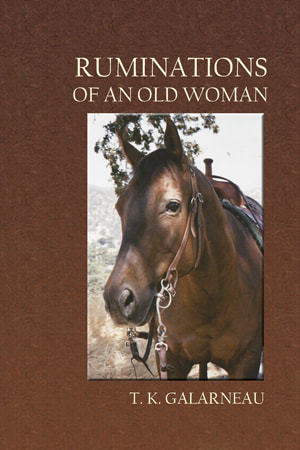 Ruminations of an Old Woman - mobi

In T.K.’s third installment of poetry and prose, the author takes a philosophical look at life upon growing old. One can picture an old woman sitting on a stump or bale of hay, wearing a wry smile, chuckling over people and the silly things they do as in “You Can’t Fix Stupid . . . I’ve Tried.” T.K. is a little more reflective in “All You Can Own” and “Don’t Look Back.” The short story “Winston” relates the struggles of an orphan to survive on his own in the west, with a little help from a wise old cow hand.

As with her previous two books, T.K.’s poetry doesn’t follow any “rules,” but are often stream of consciousness thoughts written down as they come to mind. In addition, her poems contain a kernel of truth in as much as the poems come from some place far away and long ago in her childhood.