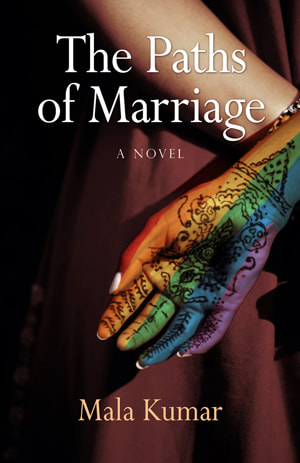 The Paths of Marriage - epub

Lakshmi, a bright student who grew up in poverty, marries and immigrates to the United States from India to provide a better life for herself and her family. Clinging to her cultural realities, she forces her American daughter, Pooja, into an arranged marriage, creating a rift of resentment. Pooja’s daughter, Deepa, is an out lesbian to everyone but her family. The woman Deepa loves presents an ultimatum—come out to Pooja or break up—and Deepa is forced to confront her greatest fear.

Three generations of Indian and Indian-American women navigate the harsh slums of Chennai to the bustle of New York City, struggling through a cathartic generational collision to try to come together as a family.

PRAISE: “Mala Kumar tackles issues that are of relevance to the Indian diaspora with sensitivity, but more admirably, with courage and tact. The issues of failed arranged marriages, the LGBTQ community and immigration among the Indian diaspora are rarely addressed by authors, and it is to be appreciated that Kumar attempts to deal with them.” — Sonali Kudva, Review, Brown Girl Magazine