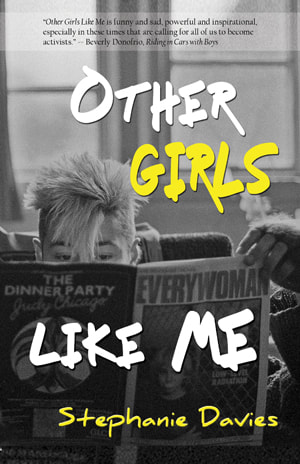 Till now, Stephanie has done her best to play by the rules—which seem to be stacked against girls like her. It doesn’t help that she wants to play football, dress like a boy, and fight apartheid in South Africa—despite living in rural middle England—as she struggles to find her voice in a world where everything is different for girls.

Then she hears them on the radio. Greenham women—an irreverent group of lesbians, punk rockers, mothers, and activists who have set up camp outside a US military base to protest nuclear war—are calling for backups in the face of imminent eviction from their muddy tents. She heads there immediately, where a series of adventures—from a break-in to a nuclear research center to a doomed love affair with a punk rock singer in a girl band—changes the course of her life forever. But the sense of community she has found is challenged when she faces tragedy at home.

“This extraordinary book pulls you into a life, into the heart and mind of a passionate woman of the 80s, with sex, rock and roll, and politics. Superb writing, honesty, and courage. Made me proud to be gay!” — Miriam Margolyes

"Other Girls Like Me is a gloriously thrilling and uplifting ride through a critical moment in queer culture, the women's movement and the story of political protest. Stephanie Davies writes with bravura wit and drive keeping one breathless with a matchless blend of admiration, hilarity and astonished suspense." -- Stephen Fry