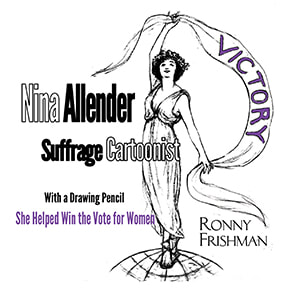 She Helped Win the Vote for Women

Few people know of Nina Allender, but they should. One of only a handful of female political cartoonists in the early twentieth century, she played a vital role in the women’s suffrage movement. Unafraid to criticize powerful men and challenge the status quo, Allender was recruited by the famous activist Alice Paul to be the “official cartoonist” of The Suffragist, the weekly newspaper of the National Woman’s Party.

Between 1914 and 1927, Allender created nearly three hundred cartoons on suffrage and women’s rights. Her images of strong, confident, stylish women countered male cartoonists’ portrayal of suffragists as ugly, nagging and unfeminine. Her suffragist, known as “the Allender girl,” was viewed as the period’s ideal of the modern female agitator. Her cartoons captured national attention and influenced public opinion, leading to passage of the 19th Amendment and full voting rights for women.