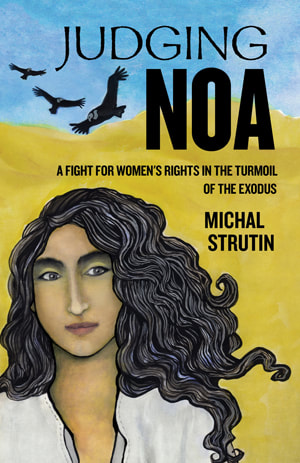 Noa, at sixteen, sets out with the twelve tribes of the Exodus, dreaming of a life of freedom and the Promised Land that her father says will be theirs. When religious fanatics kill her father, Noa and her four sisters are in danger of being sold into bondage. Noa vows to win women’s rights of inheritance to protect her sisters and herself. Pleading her case before ever-higher courts, Noa encounters a malicious judge and the dark side of power.

Gaining strength and complexity as she approaches the highest judge, Noa and her pursuit causes turmoil among the tribes: she is a notorious troublemaker, accused of witchery. And she is heroic. Based on a few biblical verses, the turbulence of Noa’s life is set against the sweeping turbulence of the Exodus. In Judging Noa, her quest for justice is a journey that has as much meaning today as it did then.