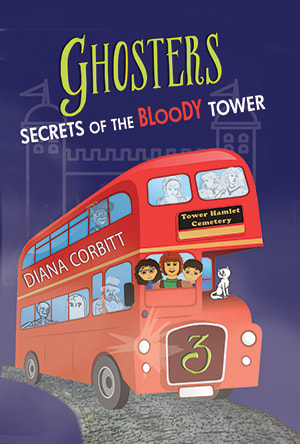 While their father is on a book tour of the United Kingdom, Theresa and her brother Joey, find themselves in London, England with their British friend Kerry. In a city with as much history as London, they expect to spot a ghost or two, especially in places with a bloody past like the Tower of London. What they don’t expect is to be confronted by the ghosts of two young murdered princes with an urgent request. They want the kids to find their hidden five-hundred-year-old remains and have their bones buried at Westminster Abbey where they belong.

Unable to resist a ghostly murder mystery, the Ghosters kids delve into the deep dark history of the British royalty as they search for clues. Of course, they can't avoid finding a lot of spirit helpers along the way. Who knew England has so many helpful ghosts?

Can three kids and their ghostly friends solve a centuries-old unsolved crime that rocked merry old England? Jump on a double-decker bus with Theresa, Joey, and Kerry as they tackle their most difficult and daring ghost hunt yet.