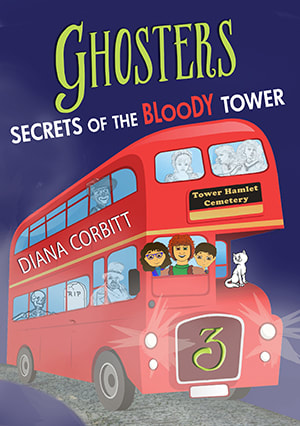 Theresa looks back at her new ghost friend. “I’m sorry, could you repeat that, Stanley?” She listens, and a slow smile begins to grow. “Really? No, we weren’t planning on it.”

“What?” I pull some more tissue from the box. “What weren’t we planning?”

“A trip to England. He says we’ll be going soon.”

“We are?” Doubtful, but not one to argue with ghosts, I blow my nose and say, “That’s nice. I haven’t seen my gran for over a year.”

A few weeks later, Stanley’s words come true, and Theresa, her brother Joey, and her friend Kerry find themselves in London, England. Of course, they expect to spot one or two ghosts as they tour the Tower of London, but they don’t expect to meet the ghosts of two young murdered princes with an urgent request: find their hidden five-hundred-year-old remains.

The princes want their bones to be buried at Westminster Abbey, where they belong, but something doesn’t want that to happen. The kids find a lot of spirit helpers along the way. Who knew England had so many ghosts? Can three kids and their ghostly friends solve a centuries-old unsolved crime that rocked England?

PRAISE: “This is an exciting and involving series. I’ve read each book in one sitting; I just couldn’t stop.” The Haunted Reading Room