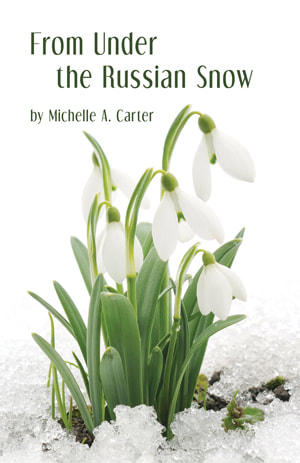 From Under the Russian Snow - epub

A memoir from Russia’s bubble of freedom in the pre-Putin era.

Michelle Carter at age fifty, married and the mother of two children in their early twenties, left her job as managing editor of a suburban daily newspaper in the San Francisco Bay area in 1995 to move to Russia for a year as a United States Information Agency Journalist-in-Residence. There she traveled across the eleven time zones of this complex country, working with newspaper editors who struggled to adapt to the new concepts of press freedom and a market economy.

​She became an on-the-scene witness to the second great Russian revolution. She viewed Russia from her flat on the embankment of the Moscow River and from her sometimes humorous shoulder-to-shoulder participation in the life of the largest country in the world. At the same time, she embarked on a personal journey that wrenched her life in a way she could never have anticipated when she accepted her husband’s challenge to take this assignment and culminate her eight years of work and travel in the former Soviet Union.

Sold out
Add to Cart