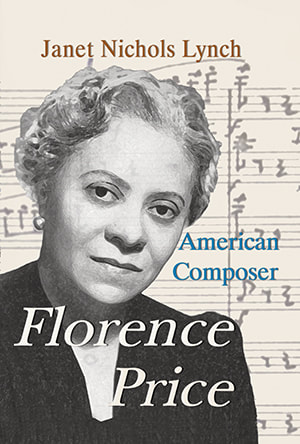 Florence Price’s life is usually summed up by a single accomplishment—as the first African American female composer to have a symphony performed by a major orchestra in the United States. In fact, she composed over three hundred compositions, including four symphonies, two violin concertos, a piano concerto, piano and organ solos, string quartets, choral works, and numerous art songs made famous by contralto Marian Anderson.

Florence Price, born in Little Rock, Arkansas in 1887, began her studies under her music teacher mother. By age eighteen, she had earned two degrees from the New England Conservatory of Music. After a stint as the head of the music department at Clark Atlanta University in Atlanta, Georgia, she settled in Chicago where her career as a composer took off when she won first prize in the Wanamaker Competition for her Symphony No. 1 in E Minor.

​To pursue her career as a composer, Florence Price faced a daunting battle on three fronts. She was a woman in what was considered a man’s profession. She was an American when Europeans were considered to be superior composers. The toughest battle was her race, during a time when racial discrimination was endemic. By combining traditional elements with African American folk songs, dance rhythms, spirituals, and jazz, Florence Price’s music bursts onto the concert stage as truly American and uniquely her own.